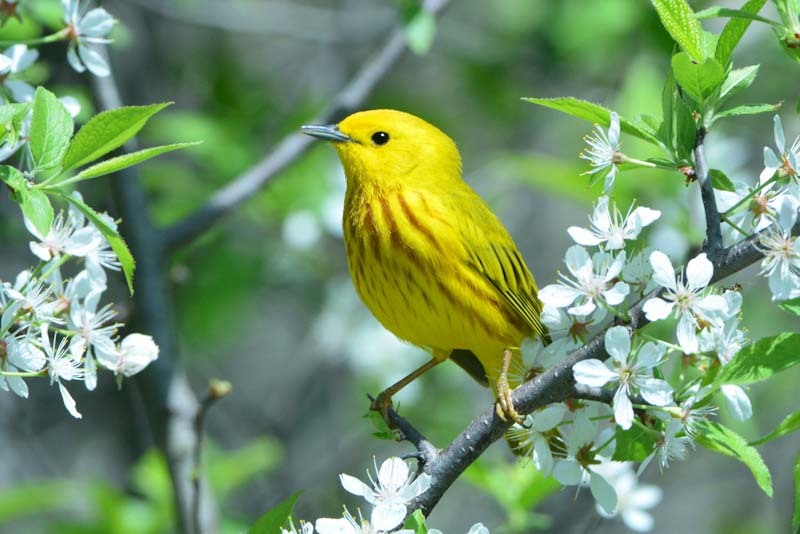 It’s a question that has been asked of me numerous times, and I’ve even been known to ask it of myself: Why do you continue to shoot pictures of birds you already have numerous photographs of already? The standard, incontrovertible answer is: “I hope to get an even better picture.” While the canned response is undoubtedly true, in reality the truth goes much deeper than that. Some might call it an addiction, and perhaps it is, but what is the underlying motivation that drives this compulsion? I’d like to suggest it has something to do with an appreciation of beauty. This male Yellow Warbler is aesthetically enhanced by its setting. The bird itself is not measurably altered, but our response to it is.

I understand that beauty is subjective and what I think deserves our admiration may not be shared by others, but there are certain common denominators shared by all. To quote from Wikipedia, so it must be true: “The Koine Greek word for beautiful was ὡραῖος, hōraios, an adjective etymologically coming from the word ὥρα, hōra, meaning ‘hour’. In Koine Greek, beauty was thus associated with ‘being of one’s hour’. Thus, a ripe fruit (of its time) was considered beautiful, whereas a young woman trying to appear older or an older woman trying to appear younger would not be considered beautiful.”

This same idea seems to be carried out by Solomon as recorded in Hebrew: “He has made everything beautiful in its time. He has also set eternity in the human heart; yet no one can fathom what God has done from beginning to end.” (Ecclesiastes 3:11 NIV) To the description of the Yellow Warbler as “a bit of feathered sunshine”, we could add it appears to be in its time.