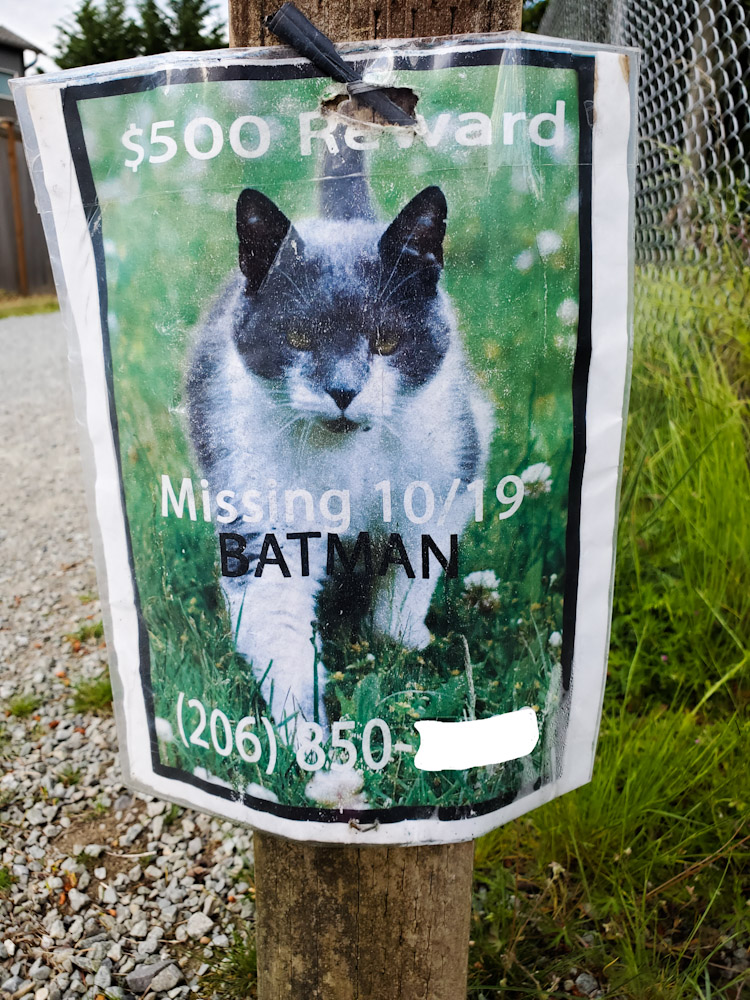 Every time we walk our neighborhood trail I see Batman. He looks me straight in the eye, and he looks as if he is about to walk right out of the poster that tells us he is missing, and that someone values him so much they are offering a $500 reward.

I often want to know “the rest of the story.” Maybe it’s because I grew up in a small town with one newspaper and two radio stations, a place where you walked rather than drove downtown, and greeted everyone you met on the sidewalk. It was easier back then to find out how local stories turned out.

But I will probably never know what happened to Batman, who went missing. It’s true that I could call the phone number on the poster, and ask if Batman was ever found. But that seems a cruel thing to do, just to satisfy my curiosity, if he wasn’t.

I like to think that someone found him, or that he strolled back home on his own, and that his family was so busy rejoicing that they forgot to take down all the posters they’d tacked up, with hope caught in their throats. I like to picture their celebration; I’m sure his favored food was part of it.

Every lost and found story reminds me of Luke 15, one of the Bible’s wonderful lost and found chapters. First there is a lost sheep, then a lost coin, then a lost son. In each small story the news is huge: the lost is found! And each story ends with the invitation to friends and neighbors to share in the rejoicing.

Only one discordant note is heard, as sounded in Luke 15:25-30, when the return of the lost son (who chose his lostness) stirs up anger and jealousy in his brother’s heart. He refuses to join the celebration and rages at his father for making merry because “this son of yours” dared come home.

His father pleads with him to join in the rejoicing, but that’s where the story stops. Jesus so often tells stories that stop, unfinished. We realize that he wasn’t telling stories to pass the time of day, or to entertain people, but to tell necessary truths in a way to reach past people’s defenses to touch their hearts.

We see this in Luke 15 because the first three verses read like this:

Then all the tax collectors and the sinners drew near to Him to hear Him. And the Pharisees and scribes complained, saying, “This Man receives sinners and eats with them.” So He spoke this parable to them, saying . . .

And then He told all three stories, ending with the lost son, and let each listener choose the way he or she would complete the ending to that story with the choice they would make. To join the kingdom of God, or not. To be part of the welcoming party for every found person; or to stew in anger, jealousy, and pride, not valuing the lost as their equals.

Many years ago when I taught in a one-room school, I would sometimes share a story with my older students that required them to write the ending. They were outraged every time – they told me they wanted to know the REAL ending to the story, not something they made up.

All these years later I realize a kinship with those students – we all wanted to know “the rest of the story,” and they especially wanted to know it was a true story.

We are writing our stories every day of our lives, and the challenge is to write them well, write them true, and choose a happy ending. Not only happy for us, but for the Lord who chose death so we could choose life, everlasting life, with our loving Life-giver.

As you walk into this week, remember that it is Jesus, only Jesus, who makes our week and our walk possible. And rejoice!