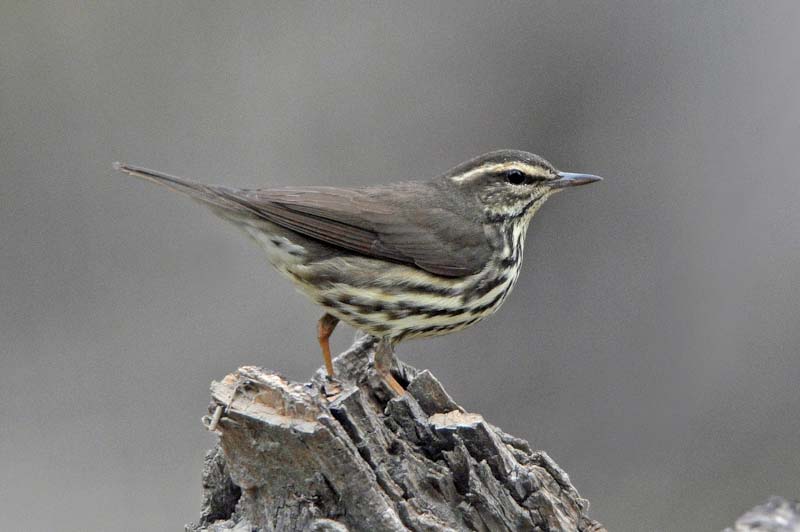 Anyone who has read much about the life of King David or pondered what he has written has undoubtedly come to the conclusion that this was one complex individual. His emotional swings shift from the highest of highs to the lowest of lows in a mere matter of verses or moments in time. The truth is, we’re not that much different, and you don’t have to be schizophrenic for this to occur on a fairly regular basis. We may rationalize the reason for this is the complex lives we are forced to live, with a multiplicity of changes dictated by our rapid changing set of circumstances. While this may be partially true, life is seldom that simple.

Consider the Northern Waterthrush, a large member of the wood warbler family. It too seems to have a complex and somewhat contradictory life. Frequently found near slow-moving water, its feeding behavior reminds one more of a small sandpiper than the typical warblers which flit through the treetops, for it will often wade in shallow water searching for insects which make up the majority of their diet. On one hand it is characterized as a skulker, favoring the shadowy understories where it can stay hidden. But its alter ego is displayed by its energetic song and its habit of constantly rocking back and forth simulating the motions of a teeter-totter.

Such is the complexity of life, for both the waterthrush and for us. For none of us are one dimensional, none sail through life on totally placid waters. And King David, a man after God’s own heart, perhaps received that title, not because he always had his act together, but because whatever situation he found himself in, he was willing to take it to God and honestly let his Father know how he felt about it. Such openness received the smile of God.