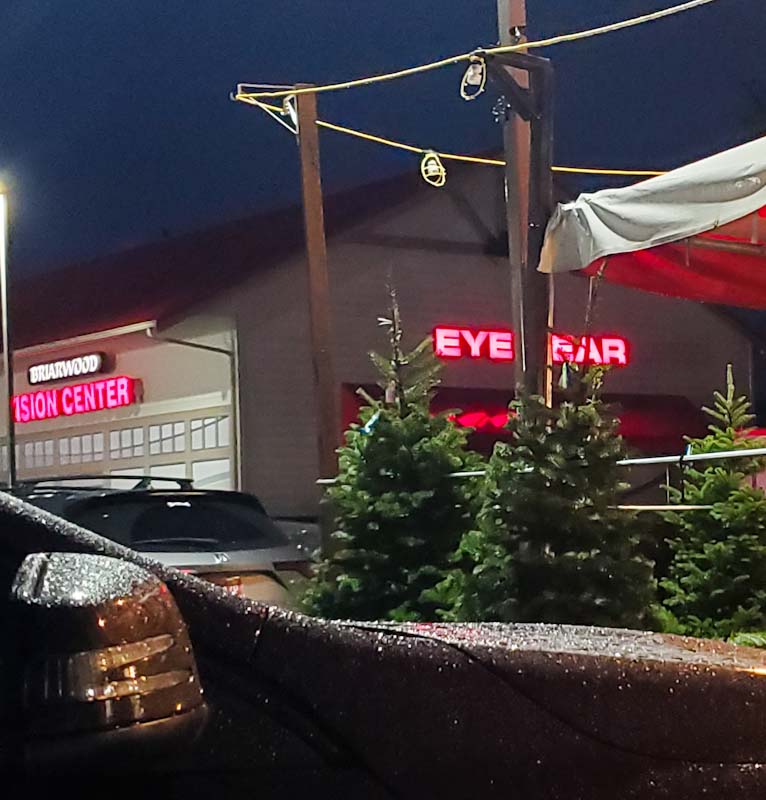 One rainy evening last November I was waiting in the car while Shelley shopped at a favorite farmers-market style grocery store. As you can see, the store had set up a lighted frame to which Christmas trees were anchored.

Gazing idly out at the scene, I suddenly realized that beyond the tree display I was seeing the words “EYE” and “EAR.” We’ve been coming to this store for many years, and I had the vague idea that there was a vision center in that building across the way, but I hadn’t realized they had anything to do with hearing aids.

Well, they don’t. You’ve probably picked up what my error was. I had parked at the exact spot where one of the pillars of the Christmas-tree frame blocked out one of the sign’s letters. Sure enough, I shifted my head sideways and saw that the word was “EYEWEAR.”

Eyes and ears, of course, are the two main senses we use to gather information. But the danger is depending too much on them for the truth about things which are beyond the senses.

Paul makes this clear in a very important passage, which I’ve reprinted below. And as you read it, try to avoid “reading into it” the idea that it’s only speaking about heaven, because it’s about more than that. As you’ll see, Paul’s point is that the Holy Spirit can reveal to us things that nonbelievers think make no sense, but which are far more true than “eye or ear” can teach us.

But we speak the wisdom of God in a mystery, the hidden wisdom which God ordained before the ages for our glory, which none of the rulers of this age knew; for had they known, they would not have crucified the Lord of glory. But as it is written: “Eye has not seen, nor ear heard, Nor have entered into the heart of man The things which God has prepared for those who love Him.”