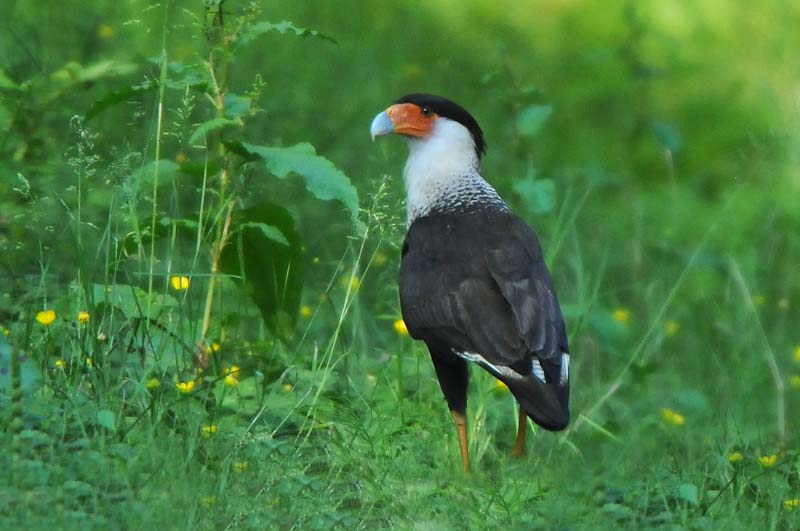 Out of place it was, and no one really had a good explanation why it was there. You see, the rather colorful Crested Caracara is generally found far south of where it was photographed in the foothills of the Cascade Mountains of Washington State. Someone described it as a tropical falcon version of a vulture, but one that generally only reaches the U.S. in Arizona, Texas, and Florida. There it’s generally found in semi-open areas in the company of scrub oak, cactus, chaparral, and similar plants, not the lush evergreen setting where this one was located.

But the caracara is unusual in other ways as well. Rather than being a rapid flier like most falcons, it’s rather sluggish in its movements, preferring to hunt on foot rather than swift attacks from above. It also differs from other raptors in that when flying they will transport their prey clutched in their beaks rather than dangling from their talons. Some have suggested that the Crested Caracara was most likely the “eagle” depicted in pre-Columbian Aztec art. The bird has been adopted as the national symbol of Mexico, but reclassified as the Golden Eagle.

There are times when we seem to pride ourselves upon being unique or special, but there are other times when we so strongly want to be like the crowd we’re willing to barter away our distinctiveness and call for a king to be our ruler so we can be like everyone else. David recognized the danger his nation faced as they lost that which set them apart and he incorporated this into his prayer addressed to their true King: “And what other nation in all the earth is like Israel? You have made a unique nation and have redeemed it from Egypt so that the people could be your people. And you made a great name for yourself when you did glorious miracles in driving out the nations from before your people.” (1 Chronicles 17:21 Living Bible) In our desire to be socially acceptable, we too must be careful not to lose our distinctiveness.