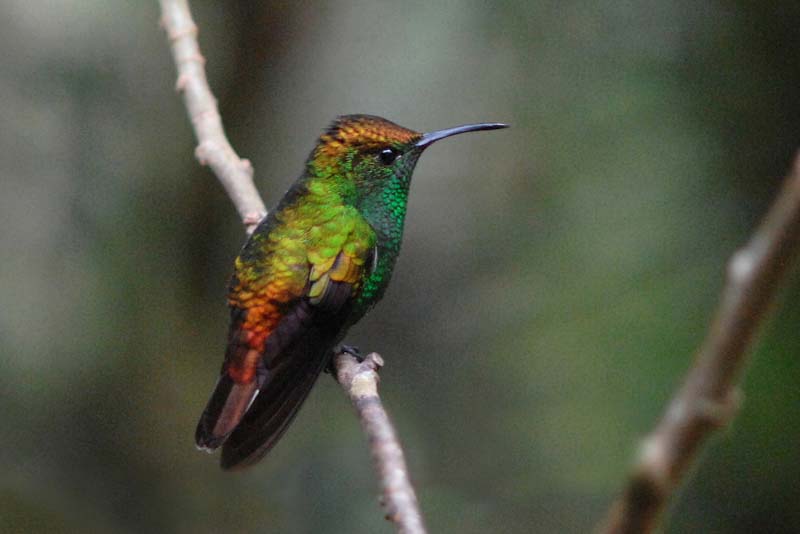 Perhaps it shouldn’t surprise us we employ names that help us connect with qualities of the person or thing we are focusing upon. Those who first encountered hummingbirds gave them that name to reflect the humming sound their wings produced. In much the same way the ancient Aztecs named their god of war Huitzilopochtli; their word “huitzil” being an onomatopoeic word for hummingbird, also derived from the sound made by its wings. In an idealized way, they imagined their fallen warriors returning to earth in the form of hummingbirds and butterflies.

Those who named this Costa Rican endemic provided us with a good description of this tiny hummingbird, small, even for a hummingbird. The Coppery-headed Emerald fits its name perfectly. The intensity of its throat and breast would not be adequately described as being green. “Emerald” more nearly conveys the richness of its plumage, as does “coppery” in describing the crown and rump of the male. No mention of its decurved bill is included in its name, but that too helps to separate it from others in the family. Found in cool, wet highland forests of both the Caribbean and Pacific slopes, the males gather in groups of three to six in leks where they sing and dance to attract the attention of females.

Emeralds are mentioned several times in Scripture: to describe the breastplate of the High Priest; included in the list of riches those from Syria brought to Israel to trade; to depict the attire of Lucifer before his fall; and as one of the foundation stones of the New Jerusalem. But possibly its finest usage is found in Revelation 4:3 to describe the throne of God: “I saw a throne had been set up in Heaven, and there was someone seated upon the throne. His appearance blazed like diamond and topaz, and all around the throne shone a halo like an emerald rainbow.” (J.B. Phillips New Testament) From John’s description of the throne, I think he would have liked the hummingbird too.