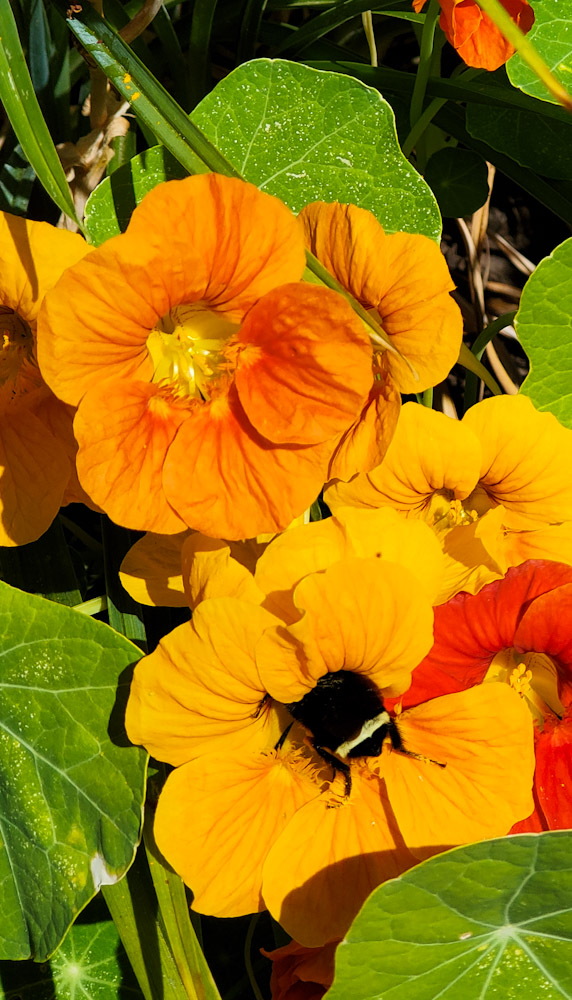 The origin of the phrase “busy as a bee” is no mystery to me. Trying to keep up with this big burly bumble bee as he zigged and zagged through our neighbor’s garden was a challenge; his busy almost made me dizzy! I finally captured a photo when he paused long enough to burrow a third of his body into this nasturtium.

I kept thinking about that word “busy” and even though it’s such a familiar word, I wanted to see how a dictionary defined it. That’s when I realized there were different kinds of busy. The first definition was one I think of most often, the adjective meaning “having a great deal to do.”

The second definition was the verb, “keep occupied.” An example popped to mind, “She busied herself in the kitchen.”

Was Jesus ever busy? I don’t see Him hurrying and hustling through His days on this earth; not that kind of busy.

And from what I read in Matthew, Mark, Luke, and John, He was never “too busy.” He slowed down and paid attention to a repentant tax collector perched overhead in a tree, a woman crawling through a crowd to touch the hem of His garment in hopes of healing, children and their mothers seeking His blessing, ten men plagued with leprosy (result: 1 grateful, 9 not so much), the dusty feet and stubborn hearts of His twelve closest companions . . . and so many more.

If I were to ask if you were busy tomorrow night, you’d know what I was really asking was if you were available, if you had time for me. Jesus was always available. His time was your time. Never too busy.

But in another sense, Jesus was busy. He “kept occupied.” After He spent nights in prayer, I think His days were filled with this one item on His to-do list: “My Father’s will.” He kept the cross in sight, always walking toward it, knowing that must be His destination in order for heaven to be our destination.

I kept thinking about “busy” and reading about bumble bees. I like how they’re described as such helpful, valuable pollinators, and some of the most social creatures in the animal kingdom. I don’t like how short their life span is, with the entire colony dying each fall, except for the queen.

And brooding about the latter tied in with a verse I discovered when I searched the New King James Version for the word “busy.” I was surprised to find only eight verses in the entire Bible. Four of them were used in a negative sense (with three of them referring to “busybodies”), three in a neutral sense, and only one in a positive light.

The cheerful verse is Ecclesiastes 5:20: For he will not dwell unduly on the days of his life, because God keeps him busy with the joy of his heart. (NKJV)

The New Revised Standard Version reads like this: For they will scarcely brood over the days of their lives, because God keeps them occupied with the joy of their hearts.

Along with this verse, I think I’ve discovered a new prayer: Father, please keep me occupied with your joy. Leave no room in my heart for brooding or worry or distrust. Help me to be always available for the people you place in my path, and never too busy to listen to others, especially You.