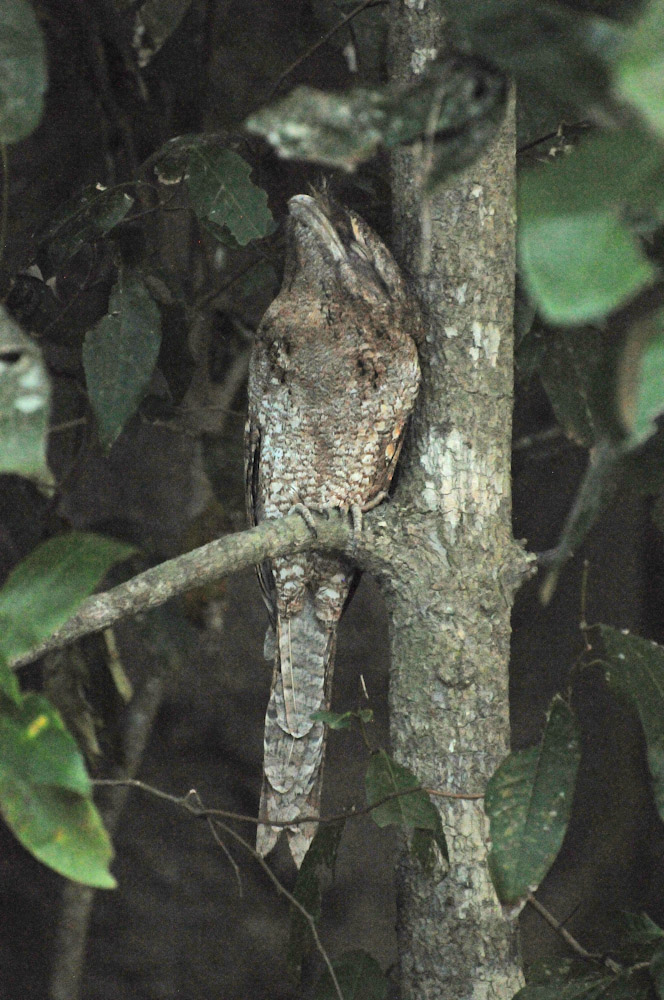 Its name is a reflection on its most obvious physical characteristic, a huge gaping mouth. In fact, its mouth is larger than any other bird’s in the world based upon proportional size. The remainder of its name indicates the Papuan Frogmouth is found in Papua New Guinea as well as the Cape York Peninsula of Australia. Primarily a nocturnal feeder, this member of the same family as whip-poor-wills and nighthawks, will launch itself from a limb and pick off any unsuspecting insect, frog, small rodent or bird in its two inch gape. Alternative methods of feeding may include waiting motionless with its wide open mouth revealing a brilliant yellow palate which may attract insects. Another, even more intriguing possibility, is that the frogmouth may secrete a substance which produces an odor that in turn attracts flies. If this is true, this method of feeding would be unique among birds.

While perched motionless during the daylight hours it becomes vulnerable to predators. To combat this, the frogmouth employs an incredible combination of coloration and behavior to protect itself. Mottled plumage of brown, gray, and beige morph it into an appearance similar to that of surrounding trees. To further enhance this deception, the frogmouth will tilt its head skyward, simulating a branch or stump. The finishing touch is to close its large, red eyes, thus finishing the illusion.

While the frogmouth may wish to become inconspicuous, our assignment is exactly the opposite, to be seen of men. “In the same way, let your light shine before others, so that they may see your good works and give glory to your Father who is in heaven.” (Matthew 5:16 ESV) The challenge most of us face in this scenario is to make sure our focus is so upon Christ that He is the One glorified, not ourselves.