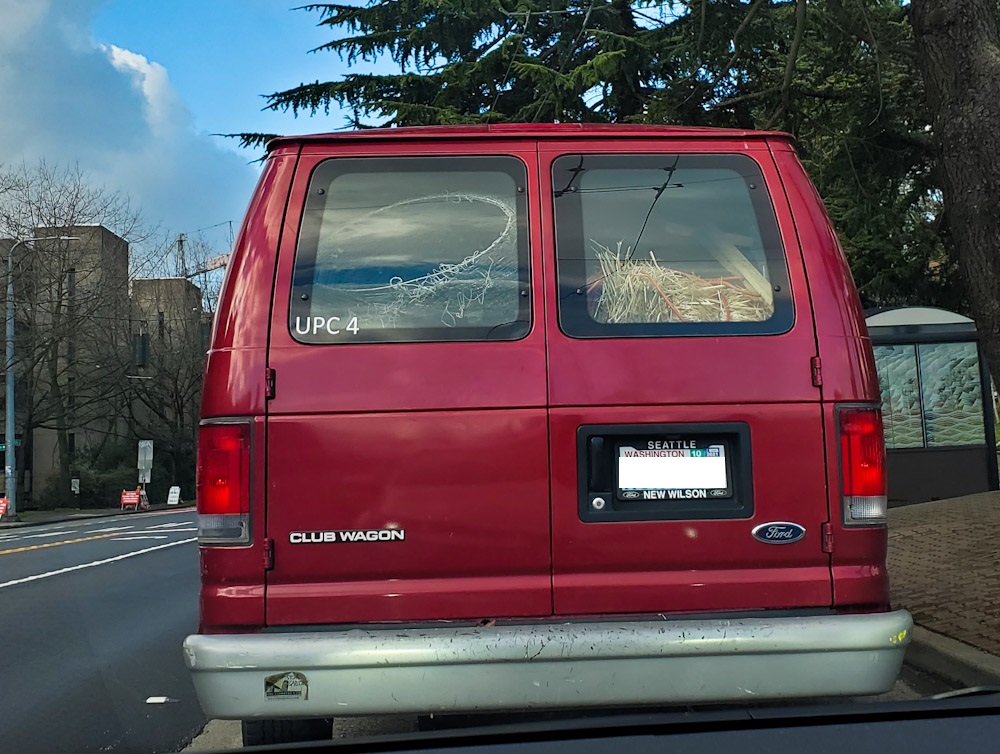 According to the above photo’s file information, I snapped it shortly after noon on December 22. As you can see, the day is a beautiful one, and though I don’t remember where I was at the time, the setting is definitely urban (note the buildings to the left, and the construction crane beyond).

I’ve whited out the maroon Ford van’s license number for privacy, but what caught my attention was the hay-bale in its right rear window. I thought, “Hey, this van is bound for the country!” Back in the day, my thin prairie-boy’s arms hoisted many a bale such as this, and they are both heavy and awkward to lift. They could put your back out.

Of course, this bale’s ultimate destination may not have been rural at all. Maybe it was being toted to add verisimilitude to a Nativity scene somewhere (though December 22 seems a bit late in the day for that). The photo isn’t close, so it’s hard to tell whether it’s hay or only straw—the former would be for consumption and the latter for lining an animal’s pen. Most likely this bale is indeed headed for the country, probably to nourish the family horse (though the mysterious ring-like device in the left window might negate this theory.)

When I spotted that bale, it brought back memories not only of the smell of hay (and aromas of various farm manures), and of a time which seemed simpler and more straightforward.

After all, I was a kid then, and didn’t have the adult responsibilities I do now. But I also didn’t have the firehose of national and world news blasting at me day and night from little screens I could carry around with me.

Aren’t you glad for God’s Bible promises of a new heaven and a new earth, where righteousness and peace and health and opportunity will fill our days? For six Bible verses which give us tantalizing hints about this place, click the link just below: