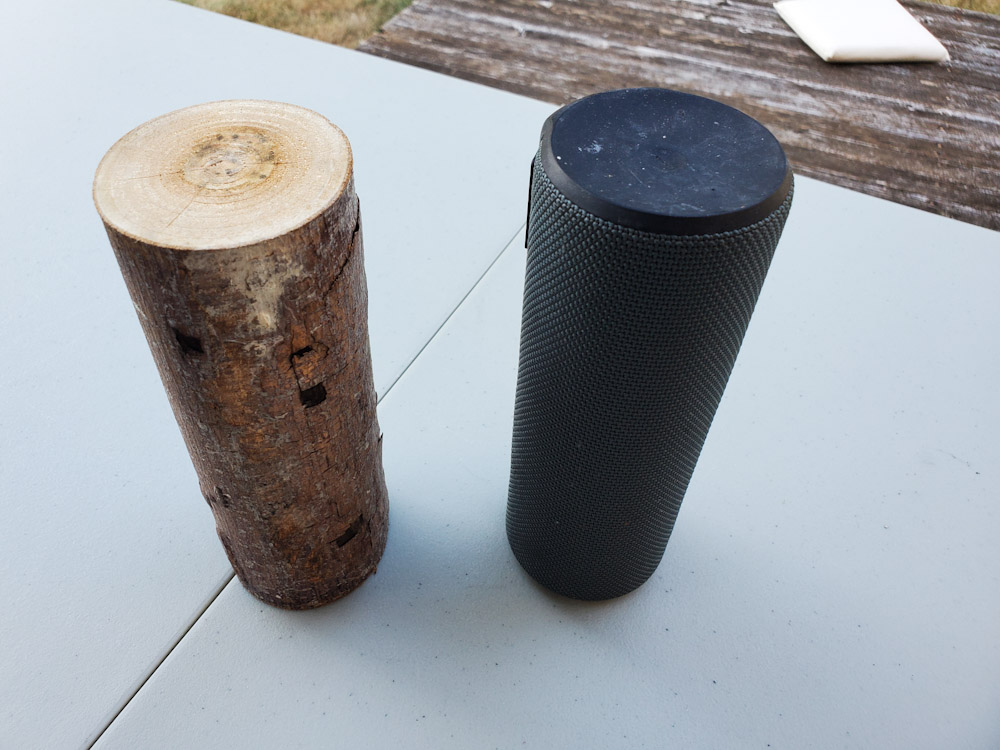 When Shelley and I bought a couple of smartphones a few years back, our energetic young salesman presented us with a couple of free Bluetooth speakers, one to go with each phone. That’s mine which you see on the right—a manly black in color. Shelley chose blue for hers.

On the left you see a section of tree-trunk which someone gave to Shelley, and which she once in awhile uses as a base for one of those little votive candles at our table.

I look at both of these objects as listening devices. The one on the right is high tech. But the one on the left is higher-tech.

Why do I make this distinction? The Bluetooth device plays whatever sound you feed into it from your phone or laptop or whatever it’s paired with. You and I and our questing fingers can summon up what we want to hear, and only that.

But the wooden listening-device is far more amazing. It communicates to us the awesome components which God put into it, and which testify to His genius and His genial generosity.

Did you know that a tree is most alive in its outermost ring or two, closest to the bark? The further in you go, the drier the wood. In fact, a tree could even be quite hollow in the center but still perfectly healthy.

Did you know that if you carve romantic initials into a tree’s bark, those initials will stay the same height forever? They won’t ascend as the tree grows, because a tree grows out from the top.

Did you know that a tree’s exposed roots are sensitive, and don’t like it when people trample on them and damage them?

Birds harvest seeds from trees. Did you know that jays can remember up to 10,000 locations where they’ve hidden acorns or beechnuts? Jays only need about 2,000 such nuts to make it through the winter, but tend to collect and bury thousands of nuts more than they need. This helps new trees to grow. (Squirrels, on the other hand, tend to collect only what they need—but they’re forgetful, and will often not be able to remember where their stashes are. Which also helps new trees to grow!)

Crows collect nuts too, but will first test each nut to make sure it’s fresh—which means that healthy trees will grow from a crow’s neglected stash.

The above information came from a fascinating book Shelley checked out of the library: Can You Hear the Trees Talking? Discovering the Hidden Life of the Forest by Peter Wohlleben

I have no idea whether the author believes in a Creator, but as someone who does, I found myself staggered with awe as I consider the amazing facts about trees.

The same God who created trees created us. Listen as Jeremiah quotes the Lord as saying:

Blessed is the man who trusts in the LORD,
And whose hope is the LORD.
For he shall be like a tree planted by the waters,
Which spreads out its roots by the river,
And will not fear when heat comes;
But its leaf will be green,
And will not be anxious in the year of drought,
Nor will cease from yielding fruit.
Jeremiah 17:7, 8 NKJV