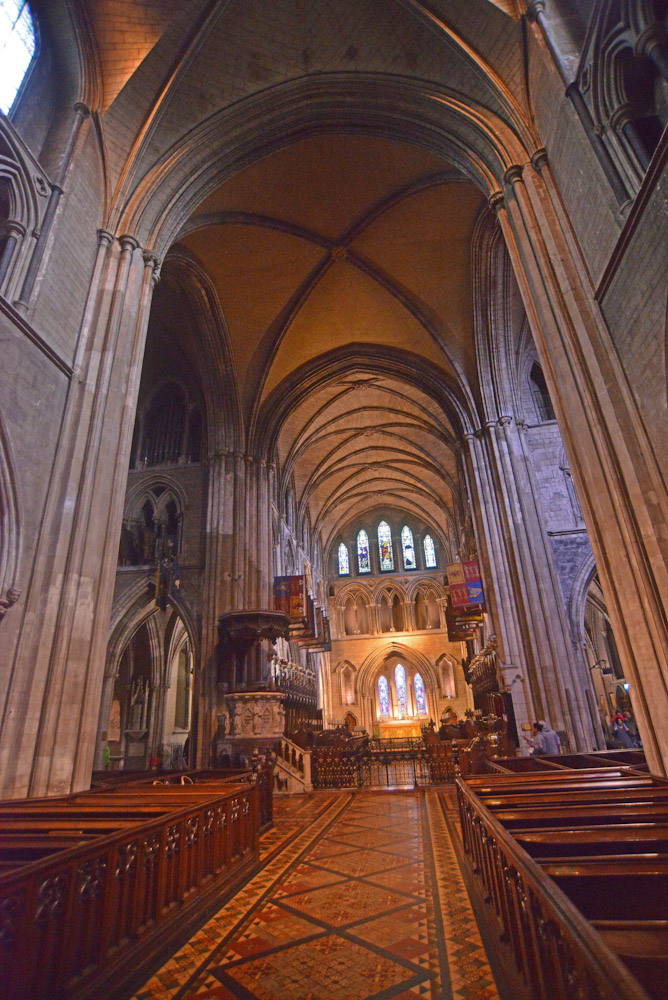 It seems incumbent upon anyone visiting Europe to spend at least a measure of time visiting the massive Gothic cathedrals that punctuate the land. And certainly none is more befittingly Irish than St. Patrick’s Cathedral in Dublin. Not only is it the largest church in Ireland but it is also the tallest with its spire reaching 141 feet into the sky. It was founded in 1191, with work overseen by Henry of London, who was also a signer of the Magna Carta. Over the years its walls have seen a parade of notables who have made their mark on history. Jonathan Swift was its most famous dean. Oliver Cromwell stabled his horses in the nave, intentionally showing disrespect for the Anglican Church which he connected with Roman Catholicism. And Handel’s Messiah was first performed there in 1742.

But like all things created by man, it too was subject to the ravages of time. By 1792 a worship service was briefly suspended when it was observed the south wall was 2 feet out of perpendicular and part of the roof was threatening to collapse. When Charles Dickens visited there in 1853 he made this observation: “The Cathedral of Saint Patrick…within and without…is in a lamentable state of decay. It stands here an anomaly, a discrepancy, unreverenced, unsympathized with, unhonoured, disavowed and disliked.”

Yet, it stands today in beauty, inviting both worshipers, and sightseers, into its immense walls. What brought about such a change from its previous derelict condition? It occurred during the time of the Civil War in the United States when Ireland was going through the potato famine. This made fundraising impossible, but in a paradoxical move, Sir Benjamin Lee Guinness, at his own expense, took about restoring the cathedral. What makes this so incongruous is that the Guinness family made their fortune through the production of their famous Irish stout.

It might not be inappropriate to compare this to the enterprise carried out by King Herod the Great in the construction of the temple in Jerusalem where Jesus worshipped and drove out the moneychangers. On a side note, Emperor Caligula intended to put a statue of himself inside the temple, but Herod’s grandson, Agrippa I, was able to persuade him this might not be the wisest move. Ultimately, it appears that worship must be something that comes from one’s heart, not dictated by walls or structures, but by an attitude towards The Most Holy.