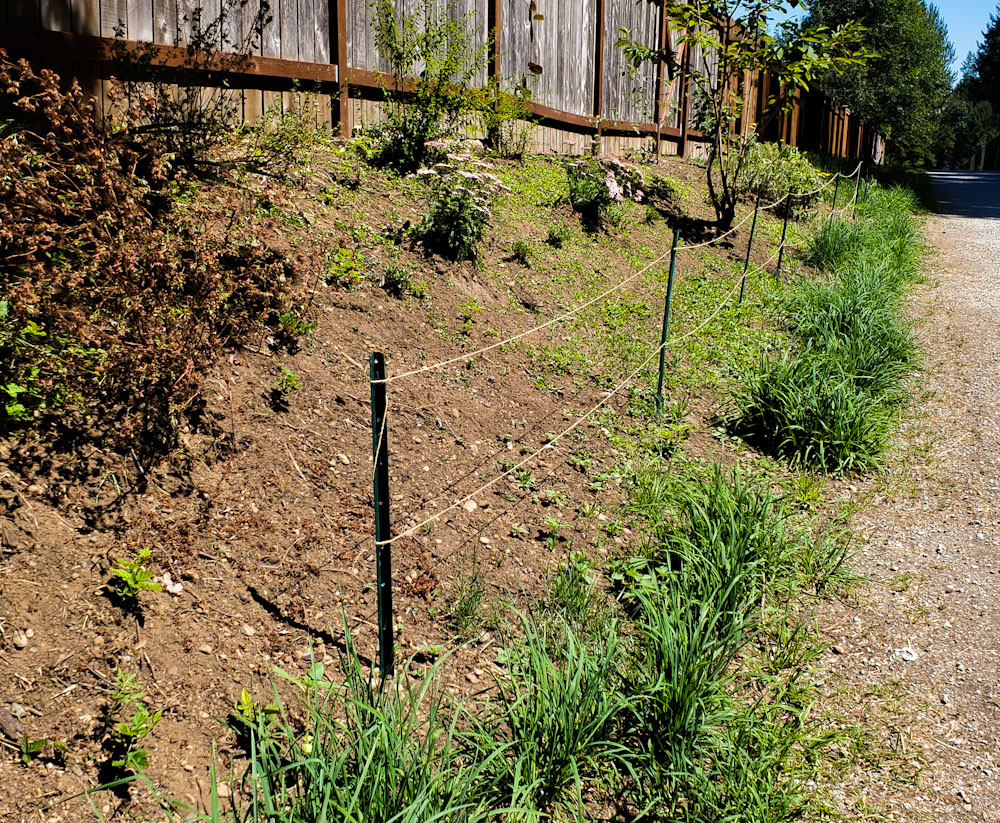 In the photo above, you’re looking at one of Shelley’s and my favorite places to walk. It’s the Lake Youngs Trail, which circles the huge lake which is one of Puget Sound’s main sources of clean water.

This part of the trail is bordered by the back fences of homes just a few blocks from our own neighborhood. Different homeowners deal differently with the strip of land between their backyard fence and the trail. Some just let wild blackberries grow, and leave it to the Lake Youngs trail crew to keep them trimmed back. Some try to plant vegetables which they hope the deer and rabbits will allow to grow to maturity—and they put up stout protective woven wire. Others don’t put up a fence and even allow their lush lawns to come right up to the trail border, which means that as we walk along we can look into inviting backyards.

The homeowners in the above photo have taken a middle-of-the-road approach. They do have a wood fence, and they’ve done some miscellaneous planting, though not vegetables.

But for some reason they have decided to put up a fence. I recognized these angle-iron posts from my boyhood days on the farm. We used a more heavy-duty version, and strung barbed wire firmly between them, rather than the baling-twine drooped limply between the posts above.

I was puzzled by this fence. What or who are they trying to keep out? And why? Bunnies would obviously slip right under. Deer, after a suspicious glance, would either leap over the twine or actually walk around to the left, unimpeded–maybe even making a light lunch on the twine itself. And after all, there doesn’t seem to be much edible foliage within the “protected” area.

So what’s the deal here? I don’t know. But this fence made me think of the Ten Commandments. They were carved in stone with the very fingernail of God, but people break them all the time. There’s no heavy woven wire or barred cage around those laws. People can break them with ridiculous ease if they want to (though they’ll face consequences later, of course, and not even from divine displeasure. Make a habit of robbing someone and you’ll probably eventually get caught. Commit adultery and you’ll do a lot of lasting damage to many people.)

To me, the fence above seems to be a mild warning. “Neighbors, we would really wish that you didn’t come on to our property.” And even though the Commandments are immensely more serious, and their consequences more eternally deadly, God has chosen to preserve them not with eight-foot bars with spikes at the top, but with the human conscience and freedom of choice.

Which means that once in awhile we need to review why God’s law is so important. To make that review, click the link just below. What you read might just surprise you.