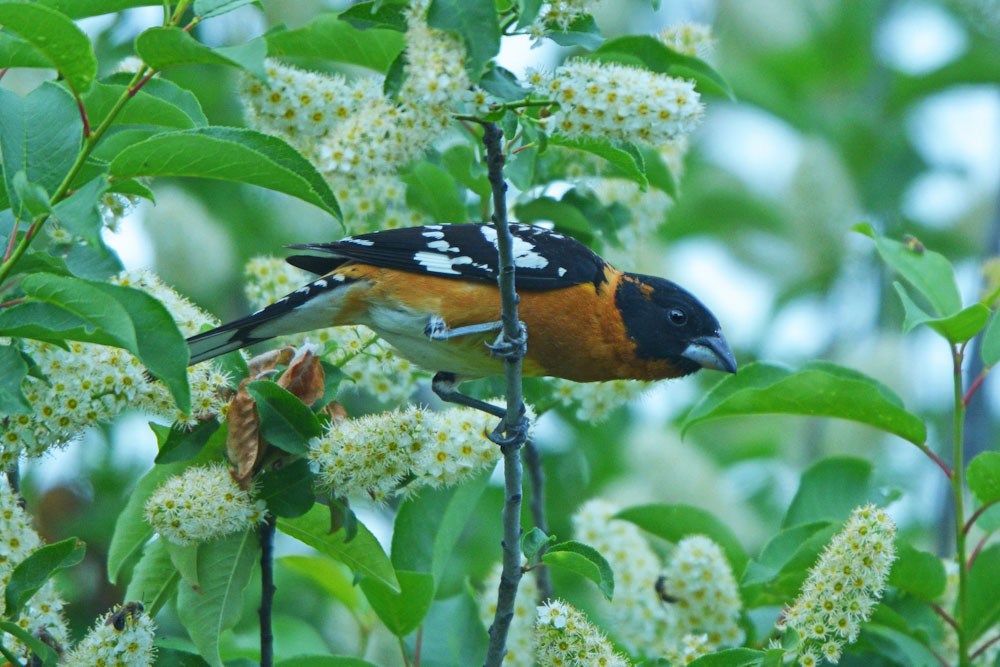 If you’ve been on this earth more than a few years you undoubtedly have come to recognize that things are often not what they appear to be. For example, you might reasonably conclude the subject of this blog is the Black-headed Grosbeak pictured perching among the leafy foliage of a Western Chokecherry. Reasonable, yes, but this commentary centers on the tree, not the bird. While photographing the grosbeak, I’d noticed the attractive shrub but wasn’t certain of its identity until I returned home and had time to study my pictures.

This confirmed that it was indeed a Prunus virginiana, or Western Chokecherry. It is a member of the rose family and of the genus Prunus, as are a number of other fruits commonly consumed by humans. However, as its name implies, the small red to black fruits produced have a very astringent taste, and being both sour and bitter may cause the consumer to “choke.” That being said, chokecherries were the most important fruit in the diet of many of the North American Native American tribes.

While humans may be able to consume the berries, the wilted leaves can be fatal to horses, cattle, deer, and other animals with segmented stomachs if they eat more than ten pounds of foliage. Apparently the wilting of the leaves, following a frost or after branches have been damaged, causes cyanide to be released as well as making the plant taste sweet, something almost too good to pass up by grazing animals.

Cows aren’t the only ones who find themselves drawn to that which is deadly. James 1:14-16 puts it this way: “No, a man’s temptation is due to the pull of his own inward desires, which can be enormously attractive. His own desire takes hold of him, and that produces sin. And sin in the long run means death—make no mistake about that, brothers of mine!” (J.B. Phillips)