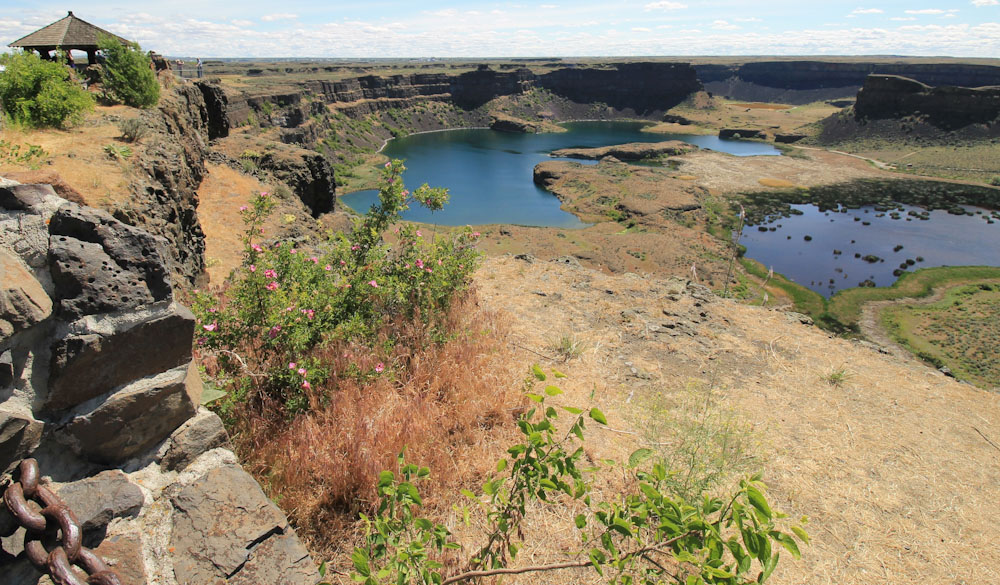 If you’ve had a chance to explore Central and Eastern Washington, you’ll find that the topography is very different from the west side of the Cascades.

You’ll find huge coulees (gullies or ravines formed by water) that have been cut through the basalt (volcanic rock) by great floods leaving exposed basalt columns on either side. You’ll find huge house sized rocks, called erratics, in the middle of a field. The erratics are thought to have been carried in ice that was transported there by flooding.

The current theory is that a huge lake formed where Missoula is currently located in Montana. This lake, at its largest, was thought to have held as much water as lake Erie and Lake Ontario combined. It is thought that this lake was held back by an ice dam and that the ice dam broke releasing this massive amount of water in as little as two to three days.

This photo is of Dry Falls, noted to be the world’s largest waterfall, which is located just off Highway 2 in Grand Coulee just south of Coulee City. The rim is 3 1/2 miles wide and it is about 400 feet deep. (Niagara Falls, by comparison, is 1 mile wide and 165 feet deep.) The lip of the falls is thought to have eroded 20 miles upstream from where it first formed.

The interesting thing is that the scientific community now accepts that all of this erosion happened over a few thousand years (with repeated ice dams forming and collapsing) and not over millions of years. You can find out more about this by looking up J. Harlen Bretz and Joseph T. Pardee who were both geologists.

For ever since the world was created, people have seen the earth and sky. Through everything God made, they can clearly see his invisible qualities—his eternal power and divine nature. So they have no excuse for not knowing God.
Romans 1:20 (NLT)