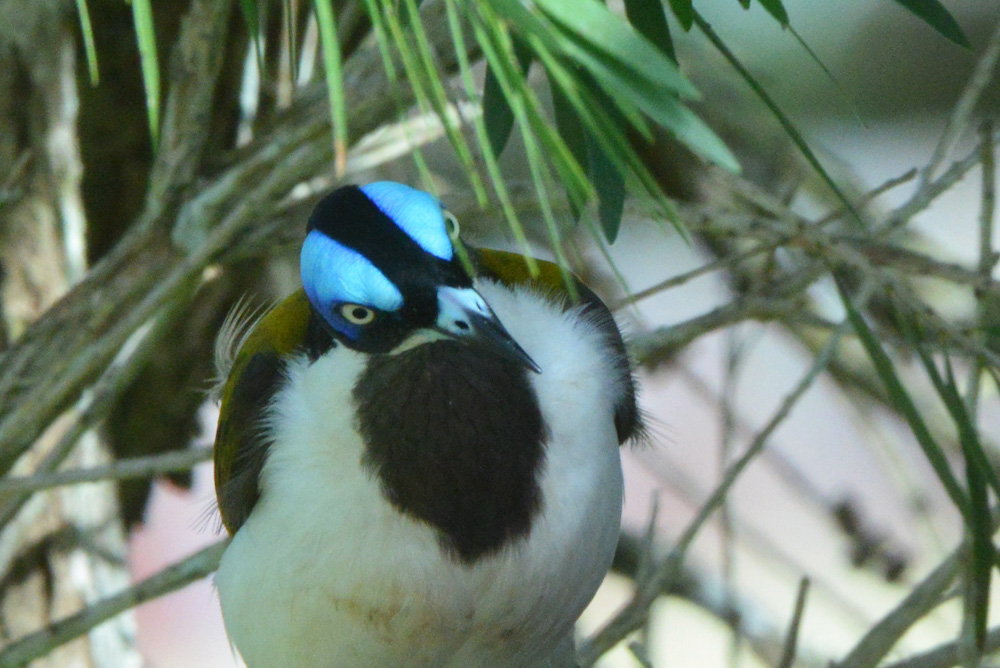 Names are often given because they reflect a characteristic or quality which is apparent to the one conferring the label. It’s obvious why the Blue-faced Honeyeater was so named, the two-toned bare skin on the face is evident as is the fact that it feeds on flowers and fruit in addition to insects which make up the majority of its diet. What may not be so obvious is why, in 1801, John Latham first classified this bird as being three separate species, not realizing he was dealing with a single variety. He went so far as to categorize the three imagined species as a grackle, a bee-eater, and a thrush. Way off!

Colloquial names include Banana-bird, for its penchant for feeding on banana fruit and flowers, and Morning-bird since it is frequently the first bird heard calling, often 30 minutes before sunrise. As might be expected, regional names vary from New Guinea to Australia. In much the same way, the Jewish names of Joseph, Hadassah, and Daniel where changed to Zaphenath-Paneah, Esther, and Belteshazzar when they found themselves captives in a far off land.

But perhaps the greatest name surprise was the one that came to Joseph when an angel instructed him to name his son-to-be Joshua, or Jesus, a name meaning “Savior” with the explanation that “he will save his people from their sins.” (Matthew 1:21 NIV) Think of the presumptive faith Joseph must have had to have exercised to follow through with those instructions. But unlike John Latham, no mistake was involved, only the greatest gift that was ever given.