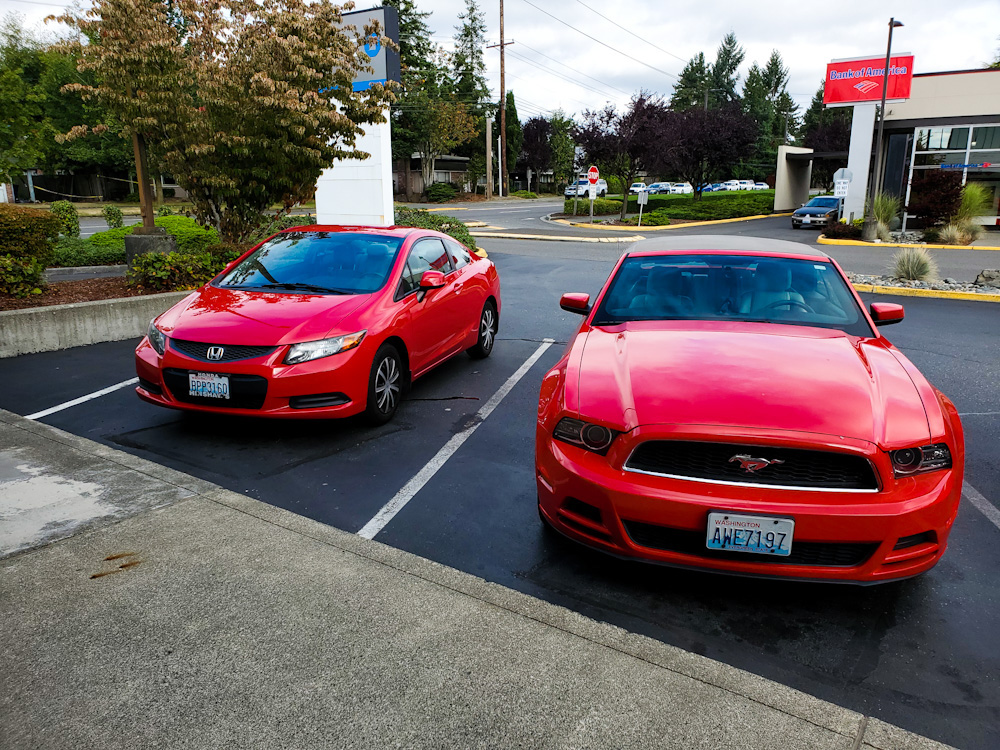 On a damp day about a month ago I had business at our bank. When I emerged a few minutes later, I saw these two coincidentally-colored cars parked outside.

In my teens and twenties, I was never one of those guys who wanted to own, or race around in, a sporty car. As a farm kid, I regarded automobiles the same way I did tractors and other motorized machines—as long as they went forward and backward, and not sideways, I was fine with them, humble as they might appear. To me, they were simply tools.

Yet as you can see, the owners of the cars above want more than dependable transport. They want to “make a statement.” The Honda on the left is the essence of dependability—I’ve owned Hondas since 1983 and have put close to 300,000 miles on each of them (my current 1999 Civic has 255,000 and is still going strong). Still, the above Honda is cherry red!

But the car on the right is a Mustang, and its owner (who could easily have purchased a Honda with probably less cash) seems more intent on provoking the message expressed by the three letters on its license plate: AWE.

To each his—or her—own, of course. God Himself has a remarkable eye for flash and color, as Revelation 21’s descriptions of the New Jerusalem prove. Yet He has equal empathy for the humble who, according to a direct quote from Jesus in Matthew 5:5, will inherit the earth.

To read seven key Bible passages on humility, click the link just below: